What’s Next Alexandria? Your Input Needed for Online Civic Engagement Activity
For Immediate Release: January 3, 2013
The City of Alexandria and ACTion Alexandria invite you to participate online[www.actionalexandria.org/principles] in refining the principles of civic engagement discussed at the November 15, 2012 What’s Next Alexandria Community Dialogue.  This online event, open to all Alexandrians, will run until January 14.
Your input will form the basis of the Second Community Dialogue scheduled for January 29, 2013, 7 p.m., at First Baptist Church, 2932 King St. The goal of the January Dialogue is to complete work on the principles of civic engagement and discuss the methods for achieving those principles, including the range of approaches identified by the community.  Childcare and simultaneous Spanish translation will be available.

Posted by Alexandria Mom at 8:50 PM No comments:
Email ThisBlogThis!Share to TwitterShare to FacebookShare to Pinterest

ALEXANDRIA POLICE DEPARTMENT
PUBLIC INFORMATION OFFICE
3600 WHEELER AVENUE
ALEXANDRIA, VIRGINIA 22304
703-746-6600
NEWS RELEASE
JANUARY 10, 2013 #13-002
3:00 P.M. DONALDSON
UPDATE:  Two Men Charged in Stolen Police Cruiser Cases
Alexandria Detectives have charged two men in connection with the two stolen police cruiser cases from December 2012.  Daniel Michael Harris, 31, was arrested on Sunday, January 6, following a traffic stop in Anne Arundel County, Maryland.  He was charged with Grand Larceny Auto and Possession of Stolen Property (Felony).  Harris is being held at the Jennifer Road Detention Center in Annapolis, Maryland where he awaits extradition.  Corie Gezono Yates, 33, was arrested on Tuesday, January 8, by Sheriff’s deputies at the Alexandria Courthouse.  He was charged with Grand Larceny Auto, Conspiracy to Commit Grand Larceny and Possession of Stolen Property (Felony) and taken to the William G. Truesdale Adult Detention Center where he is being held without bond.
The missing police issued Remington 870 shotgun and the Panasonic Toughbook Mobile Computer have not been recovered.  The investigation continues.
Anyone with information about the whereabouts of the police property or with information about these cases is asked to call the Criminal Investigations Section of the Alexandria Police Department at 703.746.6711.
Detectives would like to remind witnesses that they can remain anonymous.

Posted by Alexandria Mom at 3:17 PM No comments:
Email ThisBlogThis!Share to TwitterShare to FacebookShare to Pinterest 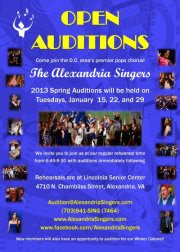 Posted by Alexandria Mom at 12:00 PM No comments:
Email ThisBlogThis!Share to TwitterShare to FacebookShare to Pinterest
Labels: Alexandria

Posted by Alexandria Mom at 10:37 AM No comments:
Email ThisBlogThis!Share to TwitterShare to FacebookShare to Pinterest
Labels: Alexandria, FACE

UpCycle CRC, www.UpCycleCRC.weebly.com, is pleased to announce expanded programming and Open Houses to introduce prospective families to our programs for young children.

Our Open Houses are opportunities for prospective families to drop-in, meet our teachers, and see what our Reggio-Inspired programs are all about.

Please RSVP to Kelley Organek, kelleyorganek@hotmail.com, if you plan to attend one of our Open Houses.

Reggio-Inspired Explorations For Young Children
A playgroup for children with parent or caregiver
Ages 1-3
Wednesdays 9:30-11:30 am
$210 for 7 sessions, starting Feb. 6

Children will have opportunities to build, experiment and play with open-ended, repurposed objects and art materials. The activities are carefully designed to promote discovery and the development of new skills.  In our supportive environment, teachers guide children’s natural curiosity to encourage sustained attention and focus. Together parents and teachers participate with the children to nurture persistence and creativity.

Research shows that opportunities to work creatively with open-ended objects and art materials train the brain by developing problem-solving skills, focus, and persistence.  In this setting the children have time to engage with materials and each other to experiment and develop ideas.  Teachers participate with the children and use their observations to design challenges for subsequent classes.

For more information and to obtain the registration form, visit www.UpCycleCRC.weebly.com or e-mail Kelley Organek at kelleyorganek@hotmail.com.

Posted by Alexandria Mom at 8:51 AM No comments:
Email ThisBlogThis!Share to TwitterShare to FacebookShare to Pinterest

FROM THE ALEXANDRIA POLICE DEPARTMENT:


In 2012, there were no homicides in City of Alexandria. This marks the first time in at least 42 years that the City experienced a year without a homicide. Additionally, initial crime statistics, though not final, indicate violent crime decreased again in 2012. This continues the trend of historic lows in Alexandria. The Alexandria Police Department’s success in continuing to reduce crime and improve the quality of life in our neighborhoods is a direct result of the quality, hard work and dedication of our sworn, civilian and volunteer staff. The Police Department remains committed to keeping crime low and maintaining a safe and vibrant community.
Posted by Alexandria Mom at 6:05 PM No comments:
Email ThisBlogThis!Share to TwitterShare to FacebookShare to Pinterest
Labels: Alexandria

(Unfortunately there aren't many participating restaurants in the West End and only a few in Del Ray.  Most of the restaurants are in Old Town.)
Posted by Alexandria Mom at 11:17 AM No comments:
Email ThisBlogThis!Share to TwitterShare to FacebookShare to Pinterest
Labels: Alexandria, Restaurant Week
Newer Posts Older Posts Home
Subscribe to: Posts (Atom)