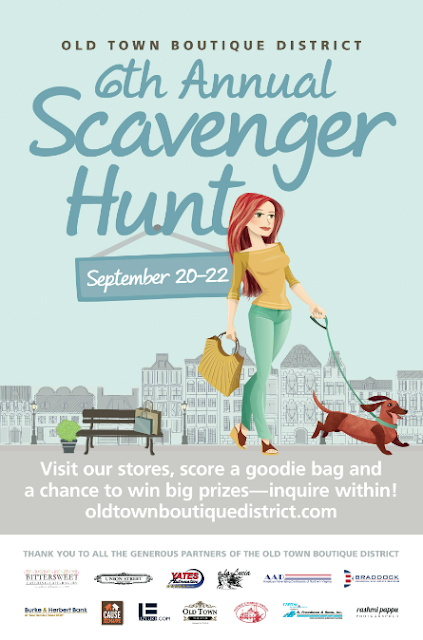 To celebrate our anniversary, the Old Town Boutique district is holding our 6th annual Scavenger Hunt. From Friday to sunday, visit all of the Old Town Boutique District stores and get your passport stamped to receive your goodies and chance to win big prizes!
1. Visit all 37 stores over the 3-day event.
2. Get your card stamped by each store.
3. Return fully stamped card to Periwinkle by the end of the shopping weekend.
4. Pick up your bag of goodies* and be entered to win one $3,700 grand prize
shopping spree plus 37 $100 prizes.**
5. Passports with 20 stamps are eligible to win one of 37 $25 gift cards.
Passports must be returned to Periwinkle by the end of the shopping weekend.
*While supplies last.
**No purchase necessary to receive your free gift or to enter to win prizes.
Download your Scavenger Hunt Passport here:

The City of Alexandria invites the public to a remembrance ceremony for the 12th anniversary of the events of September 11, 2001, on Wednesday, September 11, at 10 a.m. in Market Square (301 King St.). The purpose of the commemoration is to give thanks and pay tribute to those who responded on 9-11 without fear, acted without hesitation, and gave their lives to save others.
The ceremony, sponsored by Alexandria's public safety departments, will feature remarks from Alexandria Mayor William D. Euille, Alexandria Sheriff Dana Lawhorne, Police Chief Earl Cook, and Fire Chief Adam K. Thiel. The tribute includes the “Return to Quarters” bell-ringing ceremony, featuring representatives from Fire, EMS, Police, and the Sheriff’s Office.
In case of inclement weather, the ceremony will be held in City Hall (301 King St.) in the City Council Chambers, located on the second floor.

Posted by Alexandria Mom at 1:59 PM No comments:
Email ThisBlogThis!Share to TwitterShare to FacebookShare to Pinterest
Labels: 9/11, Alexandria, VA

Get in the spirit of the Civil War 150th anniversary by enjoying an afternoon of Civil War music at the Fort Ward Park amphitheatre on Saturday, September 21 at 3 p.m.  The concert will feature the Federal City Brass Band, a notable Civil War band that performs in authentic dress and plays original brass instruments of the period.  The program, sponsored by the Office of Historic Alexandria, is free and open to all audiences.  Please note that the concert is weather dependent.

The Federal City Brass Band, formed in 2002, re-creates the music and appearance of a U.S. Army regimental brass band of the 1860s.  Members perform songs based on original band journals and sheet music of the Civil War era.  The Fort Ward concert will feature a variety of military, patriotic and popular selections of the time, introduced with historical commentary.  Highlights of the program will include The Lincoln Inauguration March; Lorena/Bright Smiles; Polonaise last Rose of Summer; Red, White and Blue; and The Battle Cry of Freedom.  The Band will also have CDs available for sale, including its most recent recording, “Hurrah for the Union!  Music of Abraham Lincoln and the Civil War.”

Fort Ward is the best preserved of the Union forts that comprised the Civil War Defenses of Washington.  The Museum features programs, exhibits and special events throughout the year.  Fort Ward Park is located at 4301 West Braddock Road in the west end of Alexandria.

Posted by Alexandria Mom at 10:17 AM No comments:
Email ThisBlogThis!Share to TwitterShare to FacebookShare to Pinterest
Labels: Alexandria, Fort Ward

Incident at Duncan Library On Wednesday, August 28, Alexandria Police received a report of an indecent exposure at Duncan Library,2501 Commonwealth Avenue. The victim, a 35 year-old female, stated that an unknown black male exposed himself to her inside the library. Police responded to the scene, however, the suspect had already left the area. The Alexandria Police Department would like to remind residents of simple steps they can take to protect themselves and their family members from this type of crime. • Always walk in well-lit and well-traveled areas. • Whenever possible walk with others. • Be aware of your surroundings at all times. • Call 911 immediately if you see something suspicious or are involved in a crime. As the new school year begins, parents are encouraged to talk with their children about personal safety and teach them how to stay safe. Here are some things to include in that talk: • Map out a safe way for them to walk to school or to the bus stop. Avoid busy roads and intersections. Do a trial run with them to point out places they should avoid along the way, such as vacant lots, construction areas, and parks where there aren’t many people. • Encourage them to walk to school or the bus stop with a sibling or friend, and to wait at bus stops with other children. • Teach children not to talk to strangers, go anywhere with them, or accept gifts from them without your permission. Tell them that if they see a suspicious stranger hanging around or in their school, they should tell an adult. • Help children memorize their phone number and full address, including area code and zip code. Write down other important phone numbers such as your work and cell phone on a card for your children to carry with them Remember, if a crime does occur, immediately contact the Police Department. This helps increase the chances of apprehending the suspect and preventing future crimes. Anyone with information about the incident at Duncan Library is asked to call the Alexandria Police Department’s Criminal Investigations Section at 703.746.6711. Detectives would like to remind residents that they can remain anonymous.
Posted by Alexandria Mom at 11:30 AM No comments:
Email ThisBlogThis!Share to TwitterShare to FacebookShare to Pinterest

One and a half years into the Civil War, Captain John Singleton Mosby was given a small group of rangers from his former commander, General JEB Stuart to conduct independent partisan operations into Northern Virginia.  These rangers eventually became the 43rd Battalion, Virginia Cavalry, and grew from nine to around 2,000 men.
Mosby's theater of operations consisted of four counties in Northern Virginia situated west of Washington, with Fairfax County being the closest to the Union capital.  His mission was to attack and harass as many Union outposts, camps, and supply points as he could find.  By successfully raiding behind enemy lines, Mosby kept large numbers of Union soldiers confined to guarding the city of Washington; thus those federal forces were prevented from fighting against General Robert E. Lee and the Confederate army.  Military historians consider Mosby by far the most successful leader of such partisan guerilla activities.

Six local historians take you to forty-two locations in Fairfax County where "Mosby's Rangers" conducted combat operations and describe in vivid detail what happened at each.  Through on-site video, hundreds of historical photos, and an accompanying map, this documentary presents a unique visual history of the Civil War.
The film will be presented by  Charles V. Mauro on Thursday, September 19, 2013 at 7:30 p.m. at the historic Lloyd House, 220 North Washington Street, Alexandria Virginia.  Admission is free, and seating is on a first come, first served basis.  There will be a short period for questions and light refreshments afterward.

Posted by Alexandria Mom at 10:18 AM No comments:
Email ThisBlogThis!Share to TwitterShare to FacebookShare to Pinterest
Labels: Alexandria, Civil War

The City of Alexandria is committed to compliance with the City’s Human Rights Code and the Americans with Disabilities Act. To request a reasonable accommodation or to request materials in an alternative format, call Ralph Baird, Aquatics Supervisor, with the Department of Recreation, Parks and Cultural Activities at 703.746.4343 (VA Relay 711) or e-mail ralph.baird@alexandriava.gov.