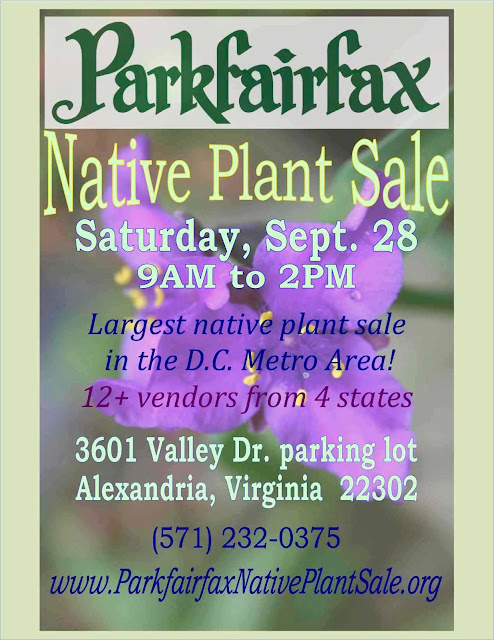 Posted by Alexandria Mom at 8:03 AM No comments:
Email ThisBlogThis!Share to TwitterShare to FacebookShare to Pinterest
Labels: Alexandria, parkfairfax, plant sale, plants

Alexandria Police are investigating a sexual assault that occurred earlier today near the intersection of North Van Dorn Street and Sanger Avenue.

At approximately 4:10 p.m., a 13 year-old juvenile was walking from a bus stop. She was approached from behind and groped by an unknown male. There were two witnesses to the incident who confronted the suspect. The suspect then fled.

The suspect is described as a white or Hispanic male approximately 5’5” to 5’8” with slicked back hair, a thin mustache and tattoos on both arms.

The investigation is ongoing. Anyone with information about this incident is asked to call the Criminal Investigations Section at 703.746.6711.

Detectives would like to remind witnesses that they can remain anonymous.
Posted by Alexandria Mom at 8:24 PM No comments:
Email ThisBlogThis!Share to TwitterShare to FacebookShare to Pinterest

Investigation of the 6 Alarm fire concludes

FROM THE CITY OF ALEXANDRIA:


Alexandria Fire Department, ATF Complete Investigation of September 2 Warehouse Fire For Immediate Release: September 10, 2013 Fire marshals from the Alexandria Fire Department, working in conjunction with the Bureau of Alcohol, Tobacco, Firearms and Explosives (ATF) National Response Team (NRT) have completed their investigation into the six-alarm fire that occurred at 821 S. Pickett St., Alexandria Virginia on Monday, September 2. After conducting interviews and completing a thorough scene examination, all accidental causes for this fire have been eliminated. This fire has been determined to be incendiary in nature and a person of interest has been identified. The estimated fire loss to the structure and contents for this incident is approximately $6 million. The case has been forwarded to the Commonwealth's Attorney for a judicial disposition. The ATF NRT is composed of members with a variety of specialties and expertise. The ATF also financed various crucial assets and resources that otherwise may have been difficult to obtain in a timely manner. These resources were needed to determine an origin and cause for this major fire and the investigation was completed within just one week. Alexandria Fire Chief Adam K. Thiel is available to answer questions about this incident tonight, September 10, at 8 p.m., in Market Square, 301 King St. For more information, contact Tony Castrilli, Director of Communications and Public Information, at703.888.7166 or tony.castrilli@alexandriava.gov . http://www.alexandriava.gov/news_display.aspx?id=74470

Posted by Alexandria Mom at 6:18 PM No comments:
Email ThisBlogThis!Share to TwitterShare to FacebookShare to Pinterest
Labels: Alexandria, Fire 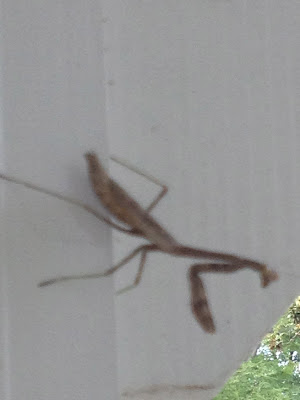 Posted by Alexandria Mom at 4:28 PM No comments:
Email ThisBlogThis!Share to TwitterShare to FacebookShare to Pinterest

Here are posts from neighborhood listservs
There was an suspicious person at at playground in Arlington Friday.
The person posting that item including postings from earlier in and around Alexandria/Arlington.
The incidents seem to describe the same suspicious person.
Please be vigilant and if you see anything out of the ordinary or suspicious, please contact the police.

9/7/13
I wanted to share the suspicious stranger alert at Ft. Scott Park in the Crystal City area that came across the S. Arlington Mom's list serv today. Description sounds a lot like the "strange older man" who was making his way through Arlington and Alexandria earlier this year and talking to/following kidsThe post from today is first, and I've also pasted the incidents from earlier this year that were shared across list servs for reference. Please keep an eye out and report any suspicious people to the police immediately. Please also share with your other list servs in the area so we can all be on alert.

9/6/13
Around 11AM today, an older man approached my three year old son in the playground area of Ft. Scott Park. As my son continued to play, the man kept hovering and waiting for my son to come down the slide to try to talk to him. When my nanny (who was nearby) approached and asked if she could help him, the man insisted that he was a family friend. (This was not true.) My nanny asked his name and a few other questions, but he was not speaking in a way she could understand most of his answers. The man had been watching some other kids playing, but had come to the park alone. My nanny became very uncomfortable with the situation. As she gathered my son and infant daughter to leave, the man took off down the side path through a wooded area.The man had white hair, was tall, and had a medium build. He face had a reddish complexion. I do not want to assume the worst, but the exchange made my nanny, my husband and me very uneasy. We had the â€œstranger dangerâ€ conversation with my son tonight and I wanted to let other families know of this encounter. My husband called the Arlington police non-emergency number when our nanny told us what had happened. We were surprised that they didnâ€™t want a description of the man or incident. We recently moved from a city where police officers/safety liaisons are assigned to neighborhoods and issues like these are addressed/documented. Does anyone know if Arlington has something similar? Should we have done something different? I know a similar incident happened in Annapolis last week. One incident (like ours today) didnâ€™t seem like a big deal. However, when Annapolis parents learned about it, other families discovered that their kids had similar encounters with a man acting strangely. There is an active police investigation going on in that area now. I do not want to overreact, but at least want to inform others. Thanks in advance for any advice or input.

June 19, 2013Hi Captain Butler,I'm reaching out to you regarding my concern about a "roaming" child predator in the NoVA community. Several incidents have been shared on multiple community list servs I'm on -- the person in these instances fit the same description (and sometimes the vehicle does too) and he's popping up in a number of communities. I also wanted to relay an incident that occurred to my family.Most recently, the "roaming child predator" described as an older man has been spotted in Mclean/Jamestown area following or watching toddlers and children -- even chasing after them/their caregivers. A man fitting the same description was spotted less than two months ago in the Del Ray area acting in very much the same manner. I've pasted below the description shared from the South Arlington list serv on April 26, as well as the one being shared on the Jamestown and Alexandria list serv right now.As for the incident that occurred with my family. At the end of April -- just a few days before the alert went out about the Del Ray incidents -- my husband and I were doing yard work while our 16 month old daughter played. An older man fitting the same description that would later be shared in the alert (older Caucasian male, white hair, big belly, glasses) came walking down our street in Alexandria and very quickly started walking toward the part of our yard that our daughter was playing in (near the fence closest to the corner/ sidewalk and "far" from us). I spotted him and how quickly he was moving toward her which unsettled me so I quickly ran to scoop her up and move her away from the fence and close to us. To be fair, we're still new to the neighborhood (moved in in December) and he could just live in the area, which is why I didn't report it. But I haven't seen him since and after receiving the alert, I've been keeping an eye out for him -- more in the hopes that he really is a neighbor rather than a child predator.I wanted to share this incident with you and also point out the possible link between predator spotted in the communities in case the information hasn't been shared across precincts/departments. Please note, Officer Harrell at the Alexandria PD has been assigned to the Del Ray cases. His direct number is 703-746-6770.

I don't want to be an alarmist, but my 10 year-old son and his 10 year-old friend were playing basketball in our driveway about a half an hour ago when a man fitting the description of the man in the email below drove down North Nottingham street into Arlington and "slowed way down and stared at us in a weird, creepy way." The man drove off. He was older, had whitish gray hair and a whitish gray beard. He was driving a white sedan. I called the non-emergency McLean number and reported it.

Hello,Unfortunately we had a horrible incident today -- our youngest girl (2 yrs) was at the small playground with her nanny and her own daughter at the intersection of Old Dominion and Dolley Madison --- very close to the Dolley Madison Library in McLean.A man in his 60ies with a white beard and white hair sat alone in the playground looking at the children for long. He is often there alone.The girls wanted to go and play in the forest behind the library - so she took them there. Suddenly she hears steps and she sees the same man running towards the girls -- she looks at him and then he stops and continues walking toward the girls fast -- she grabs the girls and manages to get out of the forest and into the library. He continues running behind them. But as she gets to the street he turns around and returns into the wooded areasShe called me and I then called 911 -- I met up with the police just now. The man's description fits the description of one of the men that tried to lure two girls into their car outside the Langley club recently (SEE BELOW). Moreover, he has been spotted in this particular playground many times and he also stalked another nanny we know, who has a young son through the forest. From the feed back we are getting he seems to stalk both toddlers and older children - girls and boys.The police just said they would keep and eye out and encouraged everyone to call the cops if they saw something suspicious. I will however follow up and demand that they place some sort of patrol in the area.Description: Caucasian man in his 60ies, a little taller than average a little bit of a belly, white beard and white hair. Today he was wearing a light blue shirt and a back pack. He may naturally easily alter his appearances.


April 26, 2013
Please read the below email from a parent regarding a potentiallydangerous interaction at our park (Mt. Jefferson Park at Hume and Raymond):On Friday afternoon (her son) was on his skateboard and two girls werewalking in the neighborhood together. A white male in his late 50s-60sapproached the children and asked if they needed a ride. He was driving awhite four-door VW. One of the girls told him no and the man continued tofollow them. The children ran home. The dad immediately got in his car andattempted to follow the man but he got away.On Saturday afternoon a parent observed a man taking pictures of kids andwalking up and down East Raymond Ave.The parent approached him; he was acting very odd so she left the park withher daughter and called the police. One of the children who was offered aride observed that it was the same person who had approached him the daybefore.The children gave the following description to the police officer:•A white male 5'8 -5'9 in height wearing a black sweat suit with purple andgreen diamonds on the jacket;•Balding with dark, heavy-rimmed glasses;•Overweight with a large belly;•Observed in a white Volkswagen with four doors and carrying a large blackcamera.The parents of the children who were approached made police reportsSaturday night. Officer Harrell has been assigned to the case. His directnumber is 703-746-6770, and the number to the Alexandria police departmentis 703.746-4444 (emergencies dial 911).If you see anyone fitting this description or acting suspiciously pleaseget in touch with Officer Harrell and the Alexandria Police Departmentimmediately. If there are other neighbors or people who use our park whowere not included on this email please forward this to them.