This makes 2 in Alexandria this week....

Posted by Alexandria Mom at 6:13 PM No comments:
Email ThisBlogThis!Share to TwitterShare to FacebookShare to Pinterest

My First Trip to the New Bradlee Safeway

So I waited 5 days before trying the newly renovated Bradlee Safeway.....

I read all the local list-serve posts and reviews, good and bad,  over the last 5 days.
I went in with an open mind and here is my take on the renovated store.

I didn't have any problem with parking.  I went in the middle of the day,  and I was able to easily park in the surface, covered,  parking lot.  Not too close to the entrance but not too far either.

I took the escalator up to the shopping level and there were plenty of carts available.
It was a little confusing as to where I should go from the cart area.   I like to start at the produce section so I headed there first, which was at the other end of the store from where I came in.
I went one way, keeping to the right, and was in the way of folks trying to exit the check out lanes and I would have to go to the right and through the check outs to get to the shopping aisles.   So I had to back track and go to the left of the Starbucks area.

The store seemed adequately lit, but some areas seemed a little darker than others.

Some aisles were not wide enough for two carts to pass.  That was mostly near the produce, and it was specialty type food aisles - Gluten Free and Mexican,  as I recall.  But most aisles seemed tight with two carts trying to pass.

The layout wasn't too hard to figure out but it will take some time to get used to it.
I like that the aisles are long and not chopped up with intersecting aisles.

There seems to be a lot of space given to product placement promotions or for tastings - lots of high, small, tables set up.  Most of which weren't in use or didn't have anything on them.

The produce section was large but seemed to be a bit disorganized.  I saw several items several times in different places.  Grapes in a refrigerator area and just on the shelf.  Apples in several areas.  Some of this may be organic and non organic but it wasn't really clear.  There seemed to be many shoppers just wandering this area looking a bit overwhelmed and not knowing where things were and in which direction they should go.

The baby section and health care goods seemed to have wide aisles in the middle of the store.  Not sure why.  Maybe this will be the seasonal area too.

The Wine area was extensive - large selection of off the shelf and chilled/refrigerated wines.
There was also a large section or selection of yogurts, more than I recall at any other grocery store in the area.

Many items were behind glass doors.  That seems to be the way stores are heading - Harris Teeter in Old Town has this same set up.  So this will just take some adjustment for shoppers.

When I was in the produce area I asked an employee where I might find Clementines.  He said "they were all located near the entrances".  I asked, "there aren't any in the produce section?"  He offered up that they were all over the store.  I said that must be confusing for him.  His reply "Yes".

The prices were just OK.  I didn't find anything at a greater discount or on sale more than what I could find at Giant.  Some items were more expensive than Giant or Harris Teeter, others less expensive.  Overall I spent more than what I have spent for the same "regular" items at Giant.

The selection was OK.  I wasn't able to find some products or the sizes of the products I wanted but in other areas I found more selection.  So I think this will just be personal preferences and will take some getting used to.

Checking out wasn't easy.  (but then again it never was at the old Bradlee Safeway!)
There was only 1 full service lane open.  Really, at lunch time, 1 check out lane.  And that was at one end of the checkout area.  Nothing at the other end.
The self check was open but was full and seemed to be backed up.  I ended up doing the self checkout and had nothing but problems, problems bagging my own, the area getting full, the reader not recognizing coupons, and other issues.  The poor employee was frazzled.
Hopefully with time this will get better.

I did enjoy seeing the many familiar faces of the employees from the old Safeway.  Many of them said they were glad to be back.  They said they had been working in other stores around the Alexandria area.

The biggest issues I had were with the carts.
There was no bottom shelf on the carts.  So I wasn't able to put purchases there - toilet paper, cases of soda or juice, laundry detergent etc.  This meant my cart was very full, and didn't make for an easy check out.
I understand why no under shelf - so that the carts can be used on the special cart escalator down to the parking level, but this makes it really hard for shoppers.

And there was NO cart return place in the parking lot.  Believe me, I looked and looked.  I ended up walking my cart back to the store.  If I were elderly, infirm, or had my kids with me,  this would not have been an easy trip to the store.  Hopefully this gets taken care of quickly or I'm sure cars will be hit by carts that people left out and about.

So, overall, it was an OK experience, nothing great, nothing too terrible that I wouldn't return to shop.
And we'll see if some of the issues get worked out over time....


Posted by Alexandria Mom at 8:55 PM No comments:
Email ThisBlogThis!Share to TwitterShare to FacebookShare to Pinterest

The Alexandria Police Department is investigating the robbery of the Wells Fargo Bank located in the 300 block of N. Washington Street.  Around 4:30 p.m. on Wednesday, December 10, a man entered the bank and passed a teller a note demanding money. The teller complied and the suspect fled on foot. No one in the bank was injured.

The suspect is described as a black male with a light complexion, between 20 and 30 years old, approximately 6" with an average build. He was last seen wearing a black "peacoat" style jacket and a navy knit hat with a pattern on it.

The Federal Bureau of Investigation has linked this suspect to two other recent bank robberies. One occurred in Arlington County on November 10, 2014, and the other in Washington D.C. on December 4, 2014. Both bank robberies were similar in nature to this incident.

Anyone with additional information about this suspect is asked to call Detective Brad Cecchetti at 703.746.6858.

The FBI is offering a reward of up to $5,000 for information that leads to the identification, arrest and conviction of this bank robber.​ 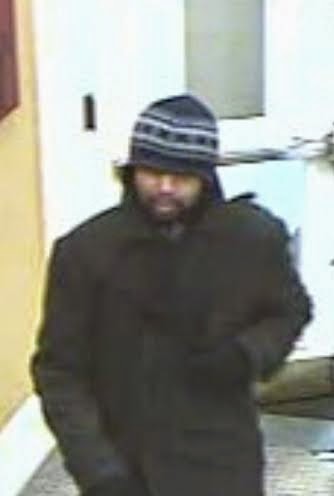 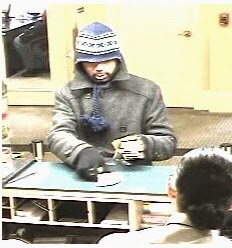 Posted by Alexandria Mom at 7:45 PM No comments:
Email ThisBlogThis!Share to TwitterShare to FacebookShare to Pinterest