Bees in the neighborhood 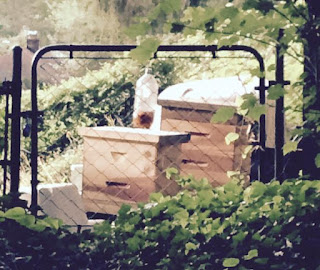 Posted by Alexandria Mom at 6:57 PM No comments:
Email ThisBlogThis!Share to TwitterShare to FacebookShare to Pinterest

On July 10, Alexandria police will conduct a DWI enforcement effort to deter and apprehend intoxicated drivers. The DWI checkpoint will begin at 9 P.M. on Friday, July 10, and continue until 5 A.M. on Saturday, July 11. Motorists will be stopped and drivers will be checked to assure that their abilities to drive have not been impaired by alcohol or drugs.

Chief of Police Earl L. Cook reminds drivers that the maximum penalty in Virginia for the first conviction for driving under the influence is 12 months in jail, a $2,500 fine and a 12-month suspension of driving privileges. In addition, there are mandatory jail terms associated with these offenses, depending upon the blood alcohol content of the driver. Virginia Department of Motor Vehicles administrative fees may apply as well.

Posted by Alexandria Mom at 11:26 AM No comments:
Email ThisBlogThis!Share to TwitterShare to FacebookShare to Pinterest

Contractors for the Department of Recreation, Parks and Cultural Activities will be on site beginning the week of July 13 to obtain soil samples at 3210 King St. The public will see specialized vehicle-mounted equipment and temporary survey flags and stakes with colored ribbons as part of the survey work. Work will occur during daylight hours and, weather permitting, will take approximately 10 to 12 business days to complete.

For safety reasons, the work may require areas of the site to be closed for short time periods. To minimize impacts to the community and to expedite the work, survey flags and stakes should not be disturbed or altered.

Soil sampling is a part of conducting a geotechnical assessment of the site and adjacent hillside. In addition, these tasks are steps of planning analysis related to the future of the facility.

For additional information or to report concerns about the fieldwork, contact Ron M. Kagawa, Division Chief, Park Planning, Design and Capital Development at ron.kagawa@alexandriava.gov or 703.746.5489.

Posted by Alexandria Mom at 10:08 AM No comments:
Email ThisBlogThis!Share to TwitterShare to FacebookShare to Pinterest

Posted by Alexandria Mom at 2:54 PM No comments:
Email ThisBlogThis!Share to TwitterShare to FacebookShare to Pinterest

June 2015 was the second-wettest month on record for Alexandria. Multiple storms produced rainfall faster than storm drains could handle flow, resulting in some ground flooding and sewer backups.  The City of Alexandria has worked to resolve issues as soon as possible when they involve City infrastructure.  However, many issues on private property are simply the result of too much rain. The City urges residents to take necessary precautions to prevent flooding and sewer backups when possible.
If untreated sewage discharges from the sanitary sewer system, report it immediately by calling 703.746.HELP (4357).  Remember to avoid contact with overflow discharges, and keep people and pets away.
Drainage Problems
Sewer Backup
For media inquiries, contact Andrea Blackford, Senior Communications Officer, at andrea.blackford@alexandriava.gov, or 703.746.3959.