Police Investigate Shooting on Russell Road
The Alexandria Police Department is investigating a shooting that occurred in 3800 block of Russell Road on Thursday, June 19, 2014.

At approximately 11:40 p.m., police responded to the area for a shooting. The victim, a 28-year-old male, was located by police suffering from a gunshot wound to the upper body. The victim was transported to an area hospital where he remains in critical condition.

The suspect is described as a white Hispanic male, between 18 and 30 years of age, 5’8” with a very muscular build. He had a shaved head and multiple tattoos on his arms. The suspect’s clothing description is unknown. The investigation is still in the initial phase but it appears the shooting occurred after a verbal altercation between two groups of people.
Anyone with information about this shooting or the suspect is asked to contact Detective Michael Rodriguez with the Alexandria Police Department at703.746.6165.

Posted by Alexandria Mom at 1:37 PM No comments:
Email ThisBlogThis!Share to TwitterShare to FacebookShare to Pinterest
Labels: Alexandria

FROM THE ALEXANDRIA POLICE DEPARTMENT:

The Alexandria Police Department continues to actively investigate the Ruthanne Lodato, Ron Kirby, and Nancy Dunning homicide cases. No arrests have been made relating to these crimes, however, the Department has narrowed the scope of these investigations to Charles Severance as its primary focus.Charles Severance came to the Department’s attention shortly before his arrest in West Virginia through a tip. During the course of this investigation, detectives have been tasked with fully vetting over 1000 tips, including investigating any connection Severance may have with these crimes. This has been a complex and time-consuming endeavor. Detectives have conducted an extensive and thorough investigation which is still ongoing. We are actively examining the facts and evidence related to these cases.We appreciate the public’s patience throughout this investigation. The Alexandria Police Department asks that anyone with information related to these homicides or Charles Severance call the Police Department’s tip-line at 703.746.6864 or email crimetips@alexandriava.gov.
Posted by Alexandria Mom at 8:23 PM No comments:
Email ThisBlogThis!Share to TwitterShare to FacebookShare to Pinterest
Labels: Alexandria 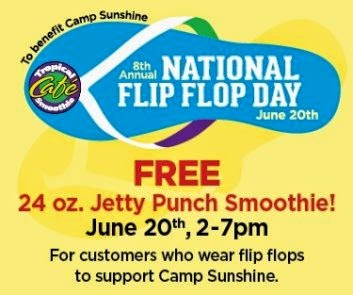 Bring on the Sunshine: Wear Flip Flops, Get a Free
Smoothie at Tropical Smoothie Café

Posted by Alexandria Mom at 7:48 AM No comments:
Email ThisBlogThis!Share to TwitterShare to FacebookShare to Pinterest
Labels: Alexandria, flip flop, summer

Police Investigate Incidents on Hanson Lane
The Alexandria Police Department is investigating an apparent suicide and a suspicious package call that occurred in the 400 block of Hanson Lane on Monday, June 16, 2014.
At approximately 6:16 p.m., police responded to a call regarding a suspicious package in a backyard. Officers found a bag containing a firearm and a suspected explosive device. The Arlington County Fire Department EOD Unit responded, and Fairfax County Police Department assisted with use of a helicopter. An item was detonated in a controlled manner to safely dispose of the possible explosive. This is a standard method used by explosive experts. Several nearby houses were evacuated due to their proximity to the detonation zone. The helicopter located a person in a wooded area that appeared to be deceased. Upon investigation, it is believed that the person died from a self-inflicted gunshot wound and was the owner of the suspicious package.
The deceased has been identified as James Froman, 50, of Alexandria. Detectives and crime scene investigators continue to work in the area. The investigation is still in the initial phase but this appears to be a domestic incident.
Anyone with information about this incident is asked to contact Detective Thomas Buckley with the Alexandria Police Department at 703.746.6837.